No items found.
Product is not available in this quantity.
Issue 001

In 1970, at age 39, painter John Baldessari took his entire life's work of rather average landscape paintings, lit it ablaze, and watched decades of work burn to ash.

I've been in this field for a bit. I've worked for some big companies and started a couple of my own (FiftyThree, Short of the Week). I've watched apps go from a creative side hobby to big business. I've watched Product Design grow from a small, nameless circle of misfits to one of the largest creative fields today (238,000 in the US). Every day millions of new dollars are invested, hundreds of new apps are launched, and the world is becoming a better place one convenience at a time. Apps have become an intimate part of our everyday lives. We wake up with them, eat with them, pee with them, and go to bed with them. Software has eaten the world, and many seem ready to hail this as the golden age of Design.

And it's time to burn it all.

The world of apps—once an exciting canvas for creative exploration—has become repetitive, predictable, and… boring.

Seriously, I can't tell one app from the next.

There was that one hot app from a couple weeks ago that everyone was raving about—but I don't remember it anymore. Just this week, there was a new email app, a new metrics dashboard, and a new bookmarking app. They are all destined to disappear into a sea of apps following the same formula—designed with the same boring templates, built with the same boring frameworks, promoted on the same boring landing page design with that same boring tone of voice. What we get are apps with the same generic and completely forgettable design promising to change our lives by making some small part of it a tiny bit easier. Product design has become overly formulaic and the apps we make entirely uninspired. Is this the end game?

I used to think it was just me.

Then I started to notice something. I've started asking my product design friends where they find inspiration, and I hear a lot about great architecture, graphic design, photography, video games, film, and art. But no one mentions any apps. Seems odd, don't you think?

You can try it yourself with a slightly different question. Ask a product designer to name a few of their Design heroes. You're likely to hear names like Dieter Rams, Paula Scher, Vignelli, and Buckminster Fuller. What you're unlikely to hear are the names of anyone designing any software.

Sure, we're a young discipline, but so are video games. And you won't find a game designer who can't rattle off names like Miyamoto, Hideo Kojima, or Arnt Jenson as well as name a dozen titles that deeply shaped their childhood.

Something is off. This simply isn't an issue you find in other design fields like industrial design, fashion, or architecture. Despite being perhaps the largest professional creative field today, Product Design seems to be missing something fundamental that exists in every other design field.

I almost stepped away.

To be honest, a couple years ago, I was ready to walk away from it all. I watched many of my friends leave Design to reconnect with the world. Usually that meant going out into nature for a long hike or to build a cabin.

I grew up in Alaska, so… I moved out to Seattle and started building furniture.

Woodworking is brutal. It's painfully slow to learn and very unforgiving. But the sheer act of jumping blindly into a new creative field as a novice really opened up my eyes. You'd be surprised how quickly designing a simple bench will lead you into existential questions about the nature of "sitting."

Ever wonder why there are so many chair designs?

I did. You'd think after thousands of years and millions of iterations, we'd have solved the problem of sitting. And yet, every year a new, bold chair is unveiled that would put a new iPhone iteration to shame.

There's a simple lesson we all learned a long time ago. It turns out, there isn't one chair for everyone. There are many chairs for different people in different situations with different values. There are lounge chairs, task chairs, benches, stools, poufs all serving a unique purpose. And if I were to go looking for a new lounge chair, I could buy a La-Z-Boy, an Eames lounge chair, or Saarinen's womb chair. A chair solves a simple need with a diversity of viewpoints.

How is it that our apps, which tackle issues that are infinitely more complex than "sitting"—issues like "human connection"—offer so much less depth and diversity?

All about that growth.

The underlying appeal in software as a business is scale. With zero marginal costs, you can build your product just once and put it in the hands of billons. The goal is scale, and the strategy is growth.

But this strategy of endless growth cuts against one of the fundamental principles in Design.

In the US beer industry, the most popular beers by sales are domestic beers which are typically extremely light lagers. They can be made cheaply, quickly and are optimized to be as "drinkable" as possible (interestingly, it's a market dominated by two players). Then, there's a craft beer market where smaller brewers explore new flavors targeted toward regional customers.

The world of apps today is entirely domestic beers. Every app is designed to appeal to everyone. Which is another way of saying they're designed so as to not offend anyone.

Now, it's easy to understand why the big tech companies pursue scale. But what boils my mind, is that every small startup has seemingly set the same strategic goal for itself. First, offering some slightly more convenient solution to an ever more-minor problem, and then, with funding secured, attempt to apply that problem to the entire world. We've given up on "flavor" in pursuit of "drinkable".

When you design something to work for everyone, you make it special for no one.

But it doesn't have to be this way.

The strategy of scale is stunting the Product Design field. I've watched it corrupt teams as design values that were once "delight" slowly morph into "performs" even if not explicitly stated. I suspect, deep down, many of us know this, but simply can't find a way to square it.

As important as knowing what your product is, is knowing what it is not and that starts with recognizing that your business is not the same as Apple or Google. Stop playing their game.

The big domestic beer makers draw their inspiration from the craft brewers. There are styles and flavors that a small brewer can explore that a massive industrial brewer never could. The big clothing brands are inspired by the small fashion boutiques. Blockbuster directors find inspiration in indie and short films.

If you're small, you're in a position where it's to your advantage to be weird—you can have a point of view that the big tech companies never could. In the world of chairs—you're not going to build a cheaper chair than Ikea. Why not build something they couldn't—like a more interesting one?

For me, this thinking begins to answer the question of what is missing the product design field. It opens up the medium of software as a platform for something bigger than solving problems.

Why do furniture designers keep designing new chairs? We know it's not to solve the problem of "sitting." The chair is simply the medium. The true goal is something bigger—to inspire, to broaden our understanding of what's possible, or express something unique about what it means to be alive today.

Imagine if our everyday apps embraced this? What might we see? I get goosebumps just writing about it.

We missed the point. We're supposed to be dancing.

Perhaps it's part of maturing, but I'm at a point in my life where I don't want more—I want better.

When I use your app, I don't want to see your company's KPI. I want to see your point of view. The world should know that you made it. People should feel your passion vibrating off the screen.

I want us to collectively raise the bar for what we expect from our digital experiences. Life isn't just a series of problems to be solved but moments to be lived. As we find ourselves spending more and more of our time in the digital world—especially now—we should expect that world to inspire, surprise, and dare I say, even challenge us. We are lucky to be versed in a creative field where we can dream up magical things that can touch the lives of billons. Like other design fields, we should see the work of product design as more than a business optimizer but as a powerful vehicle for expressing ideas that can push culture forward.

That's what I did.

I left a perfectly comfortable job to start ANDY WORKS to rethink the role of Design in our digital lives—starting with something as small as an app. The larger hope is to uncover an alternative way that products, and even businesses, can be built. Join me? 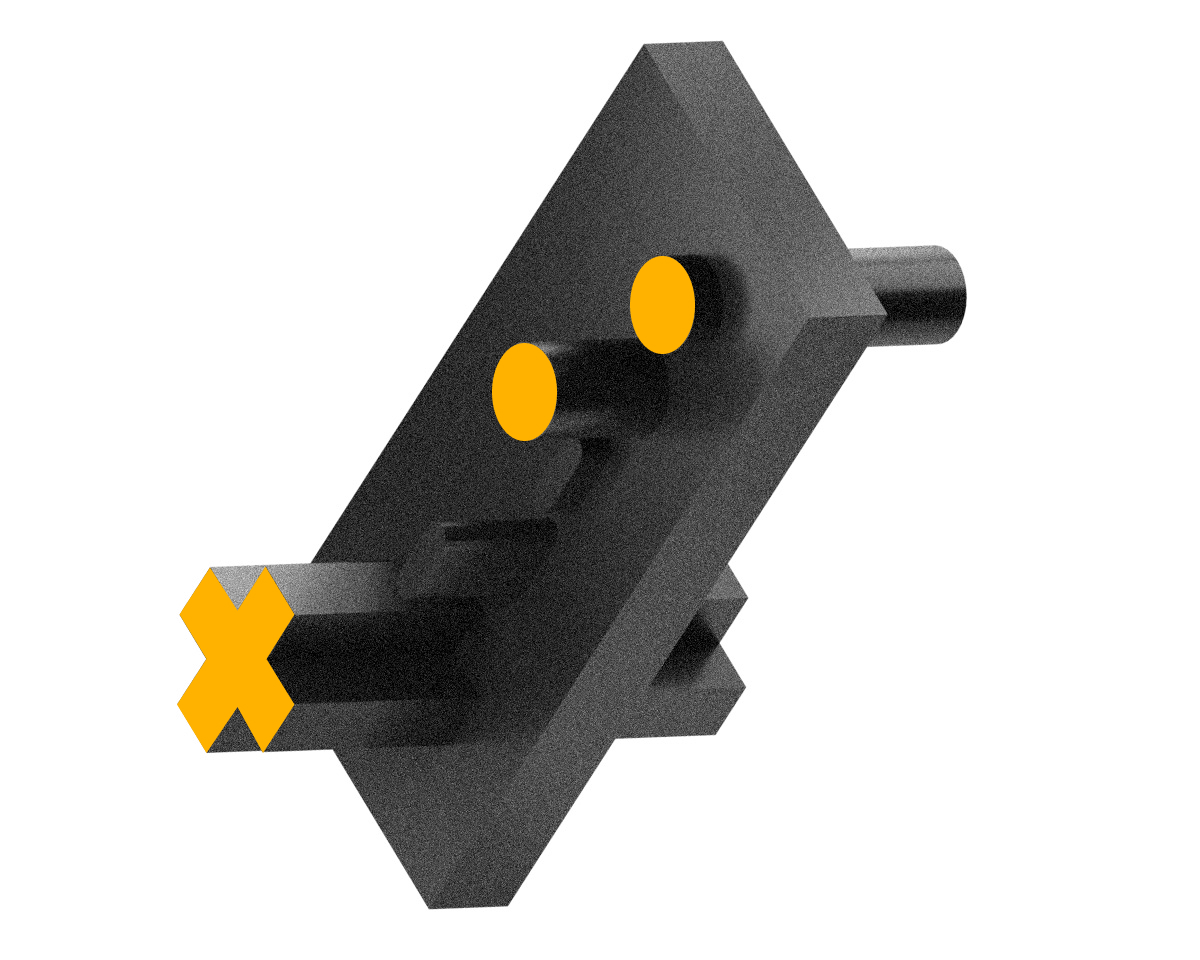 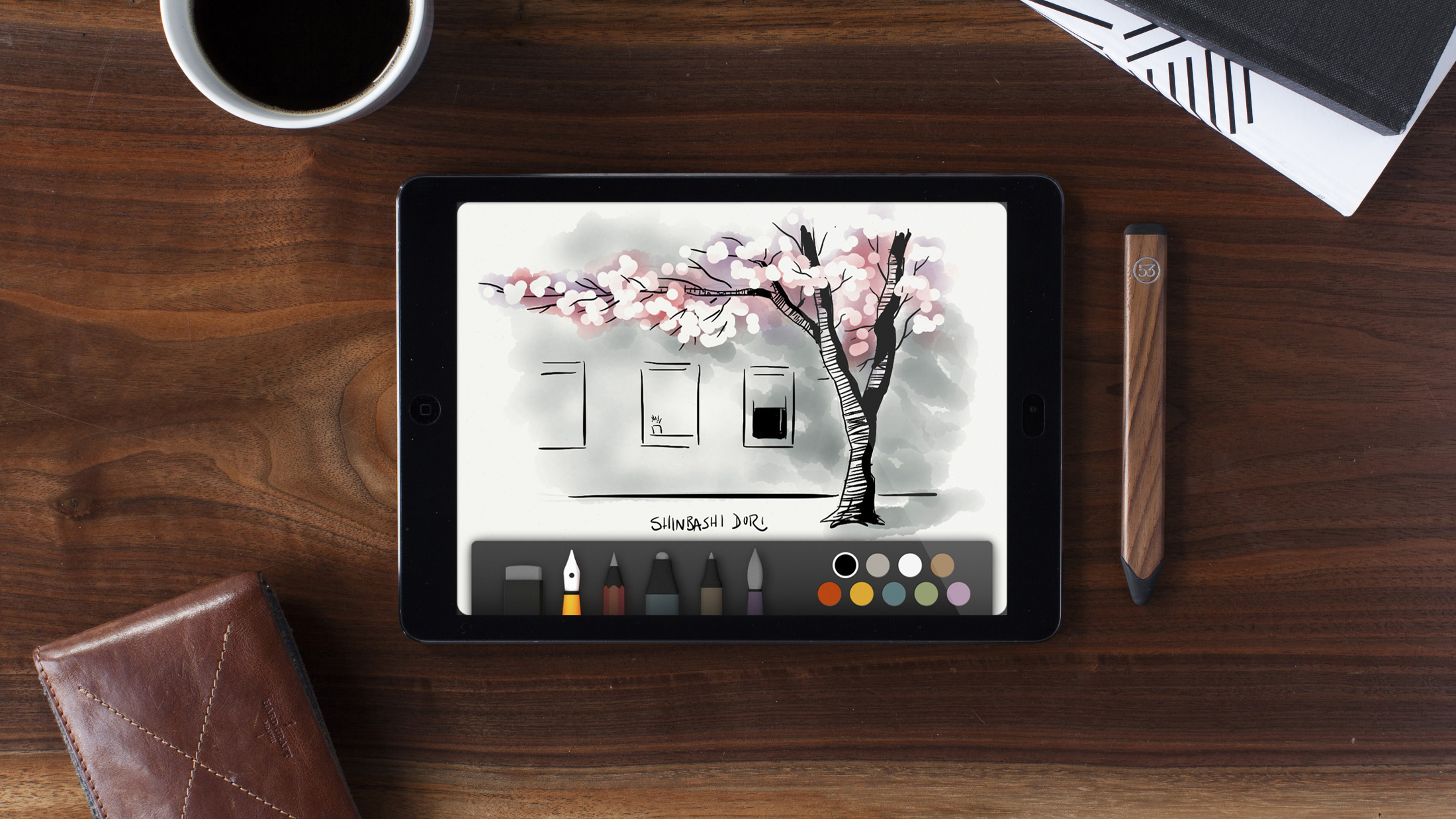 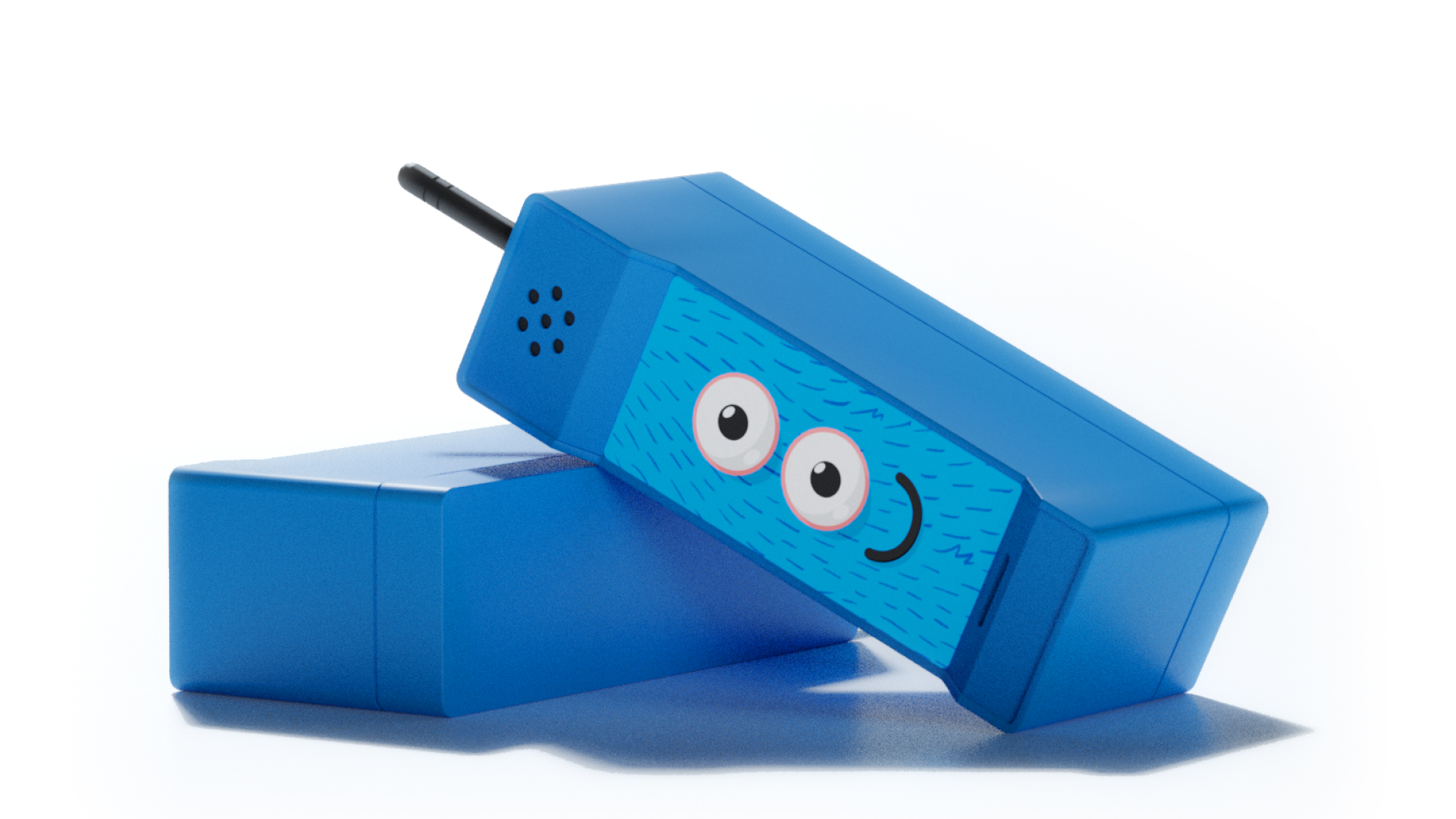 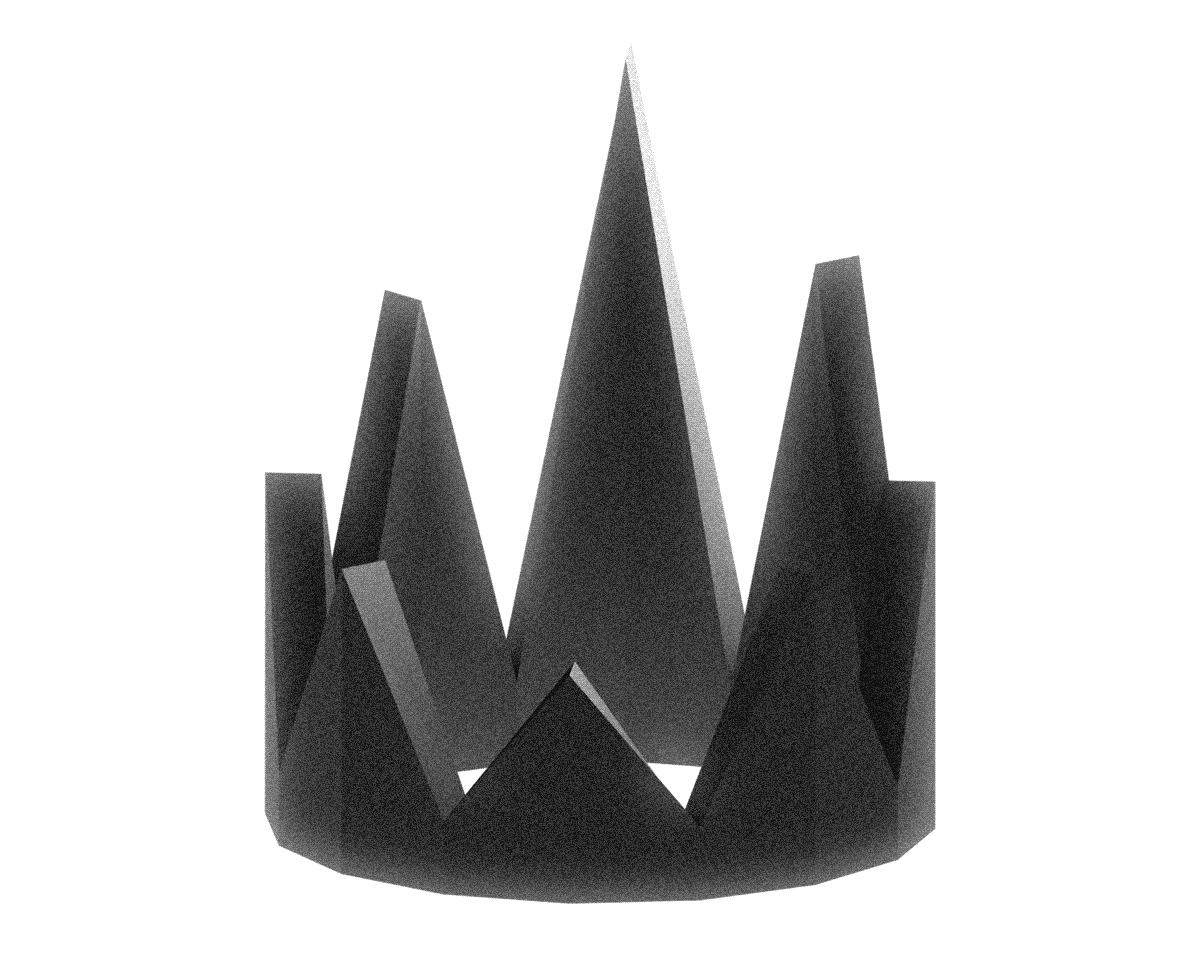 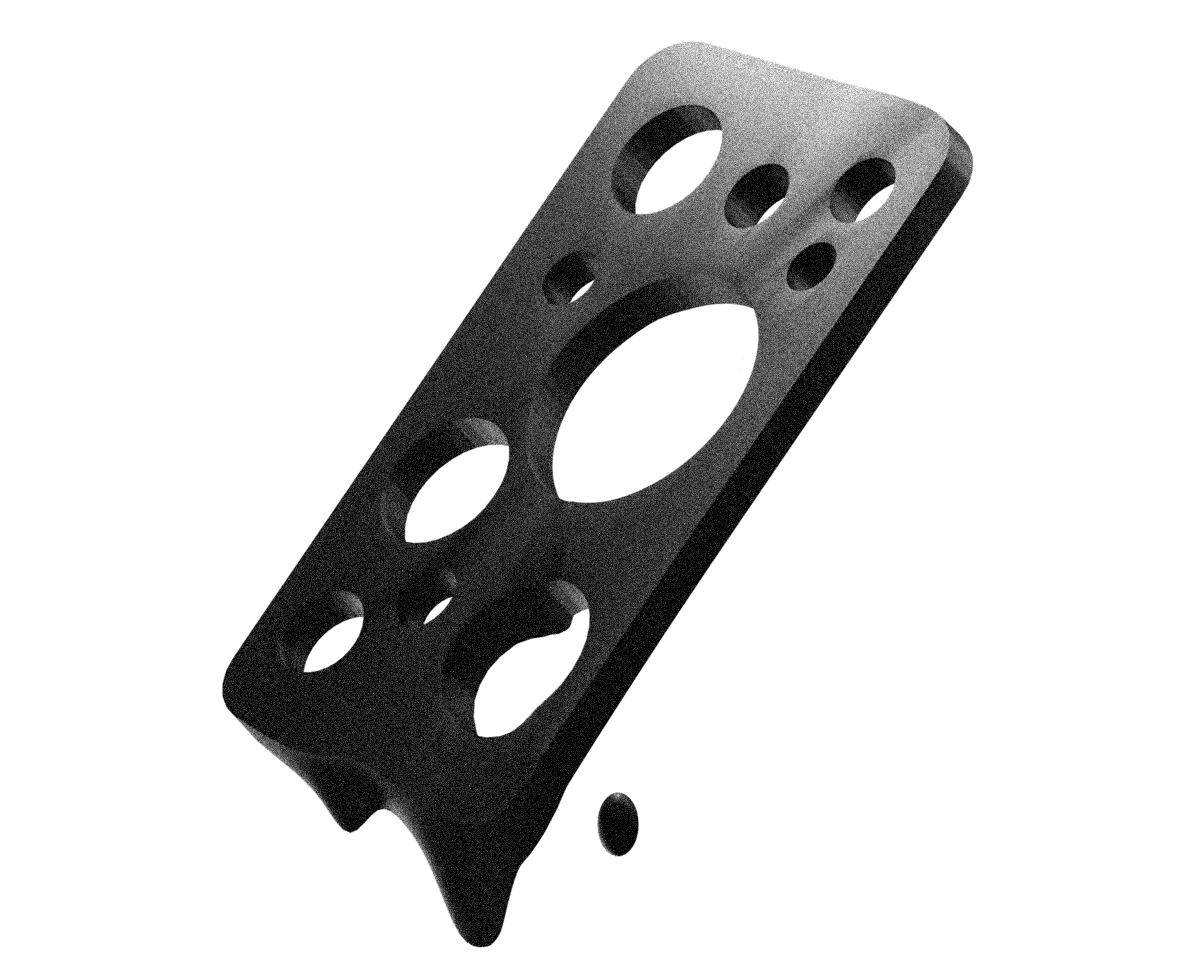 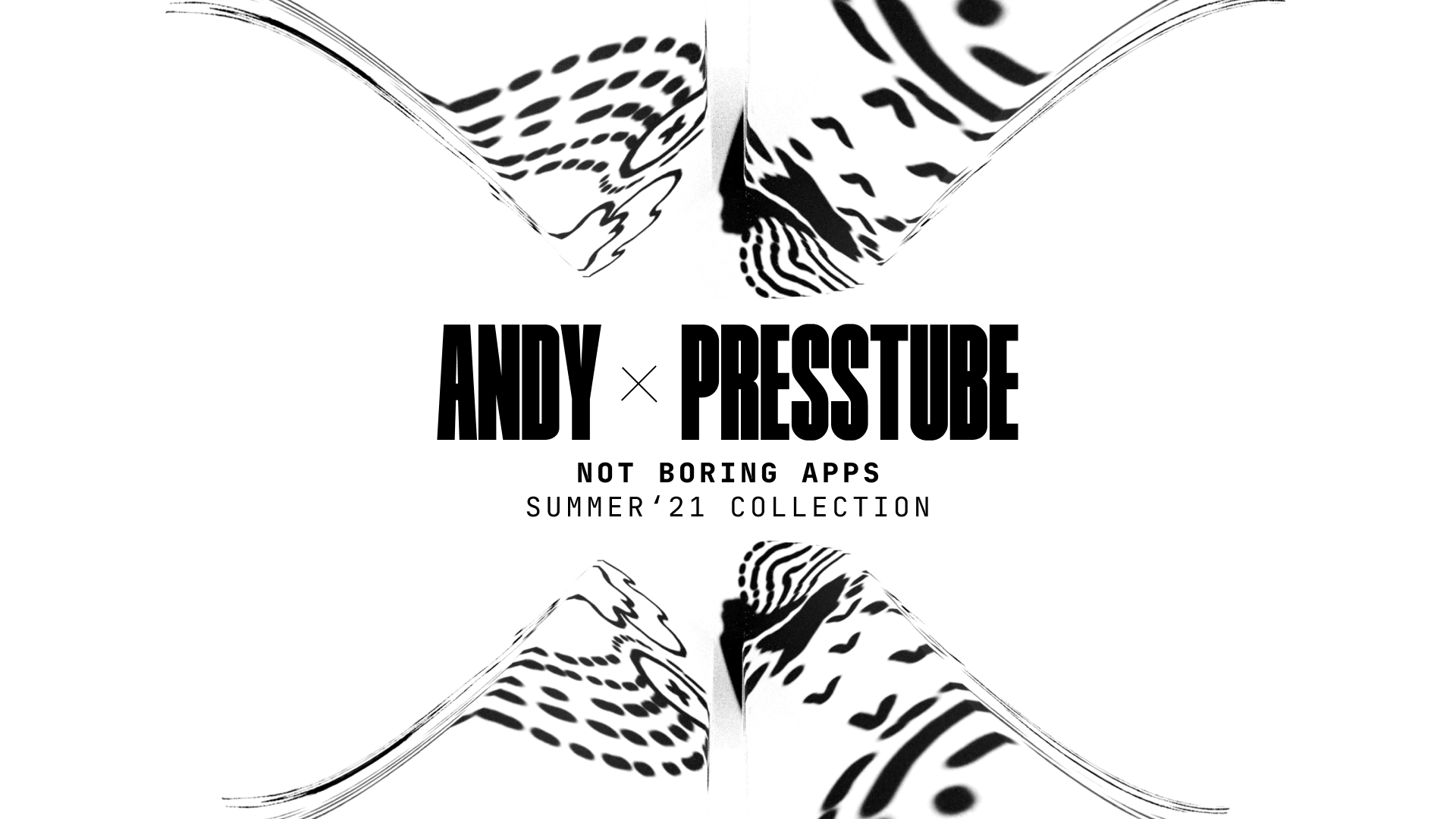 Summer '21 Collection and our first Artist Collaboration with Presstube